A couple weeks ago (the day after Valentine’s Day to be exact), Murray and I made the 50-minute drive from Kitchener into Mississauga (Streetsville to be exact) to have afternoon tea at The Tea Room in the Robinson-Bray House (223 Queen Street South, Ph: 905-542-7674). 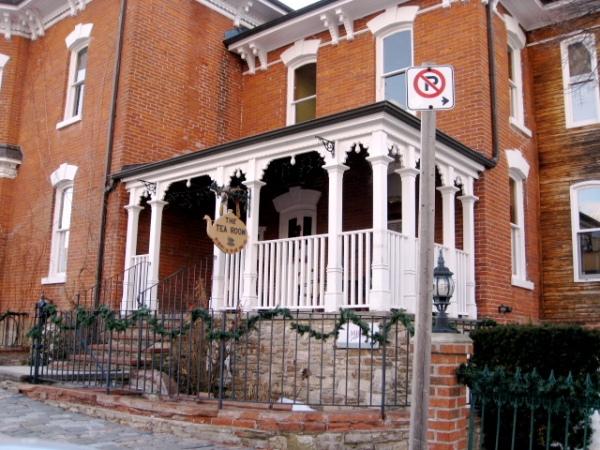 The side entrance to The Tea Room at the Robinson-Bray House in Mississauga, Ontario

The house was built in 1885 and owned by at least two families – the Robinsons and the Brays. In 1983, it was designated a building of “architectural and contextual value” by the City of Mississauga. It now houses several businesses including a gift shop, spa and The Tea Room.

The Tea Room is in the back of the building. You can enter either through the front or the side of the House. When we left through the front after finishing our tea, I noticed that a large room at the front of the house was vacant. The space had a lovely bay window looking out onto Queen Street. My first thought was that it would be a lovely area for The Tea Room to expand or move into.

But I’m ahead of myself. Let me share our tea experience.

You could order off the menu but we really didn’t give it much consideration as The Tea Room was serving a Valentine’s tea ($23 per person) which sounded really nice. It started with a delicious garden salad with sliced strawberries and cucumbers and pralined pecans. This was followed by a two-tiered stand filled with tea sandwiches, and heart-shaped chocolate chunk scones served with devon cream and preserves.

The tray of tea sandwiches included (clockwise from top right) egg salad on a mini croissant (which turned out to be a roll as you can see above), chicken and brie on a slice of baguette with sweet mango chutney, a roast beef and horseradish mayo wrap with caramelized onions, salmon mousse in a phyllo cup, and a cucumber and cream cheese sandwich.

Then, because we hadn’t eaten enough yet (!),  it was time to choose a dessert. I don’t recall all the choices; the first couple our server described were all we needed to hear. Murray chose a Chocolate Crepe with Amaretto Cream and Mixed Berries.

I opted for the Passionfruit and Mixed Berry Trifle, served in a tea cup. 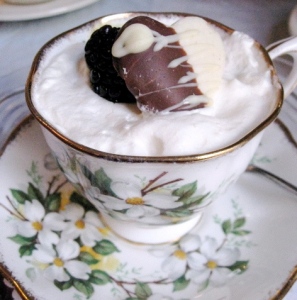 The Passionfruit and Mixed Berry Trifle was garnished with a chocolate-dipped cookie and berries.

Everything was washed done with a pot of Earl Grey tea for me and Assam tea for Murray.

The Tea Room’s servers were friendly and attentive. The decor of the two-room tea room was nice enough, although nothing outstanding.  I’ll confess I wanted to straighten out the slightly askew picture hung off centre under a shelf on one wall of the room we sat in, but to Murray’s relief I managed to suppress the urge.

Other than the egg salad that was served in a slightly soggy mini roll instead of the promised croissant, the food was very tasty, especially the salad and desserts. Needless to say, we didn’t need to eat for the rest of the day!