If you’re a hockey fan, you probably know the annual World Junior Championship (WJC) is in full swing in Ottawa. It started on Boxing Day (Dec. 26) and the gold medal game will be played on Jan. 5.

So far, Canada’s team has fared very well. Fingers are crossed that the streak will continue tonight with the highly anticipated match between Canada and the U.S.

I wouldn’t count myself as a true hockey fan, however I’ve been known to watch the occasional game. With a husband who scouts for the Kitchener Rangers, sometimes I don’t have a choice! 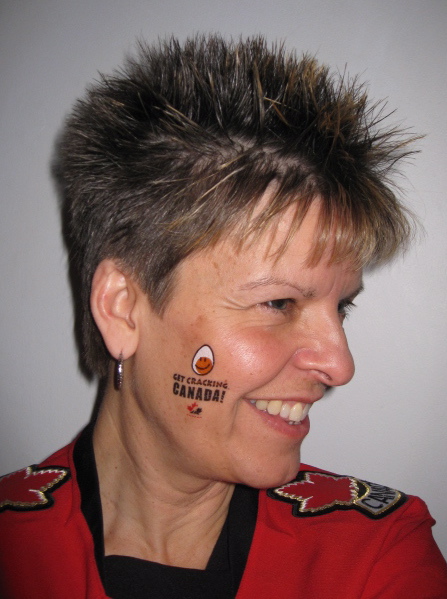 Modelling the Get Cracking Canada! tattoos we gave out at the Dec. 28th game of the World Junior Championships

Since Egg Farmers of Canada and Egg Farmers of Ontario are sponsors of the WJC, I attended Sunday’s game at Scotiabank Place – Canada vs Kazakhstan. It was egg promo night so a few colleagues and I handed out “Get Cracking Canada!” thundersticks and tattoos, as well as recipe cards for Pizza Frittata.

To get into the spirit of the game, we decided we should wear the tattoos we were giving out. The tattoos proved to be quite “permanent”! The one I put on my hand didn’t wash off easily after the game, so I decided to leave the tattoo on my face alone instead of trying to scrub it off. I did get a few comments and curious stares as I waited at the Ottawa airport for my flight back to Toronto. Once home, the tattoo came off with a little effort and a washcloth!

The Pizza Frittata recipe cards proved to be a popular giveaway. Most people like pizza, and a frittata (an open-faced omelette) is an easy thing to make. The cool thing about the cards is that they have a small packet of seasonings (containing mostly dried herbs) stapled to them. 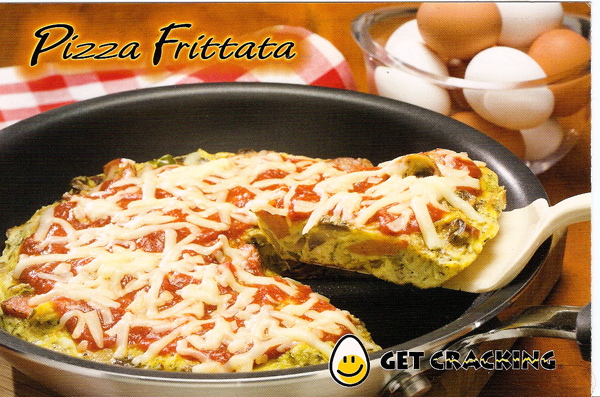 We give out these cards at many of the events Egg Farmers of Ontario attends. (I mentioned them and provided the recipe in my April 28th post, but I didn’t show what the cards look like. For convenience, I’ll provide the recipe again below.)

At first people are curious about the card, or more accurately, they’re curious about what’s in the packet. Sometimes the contents get mistaken for seeds….or for something illegal that can be smoked!! We had numerous comments about the latter at the game. Not so sure about that hockey crowd!?!

END_OF_DOCUMENT_TOKEN_TO_BE_REPLACED

As a follow up to my April 28th post with the recipe for Pizza Frittata, here’s a picture of a quick-version single-serving Pizza Frittata. 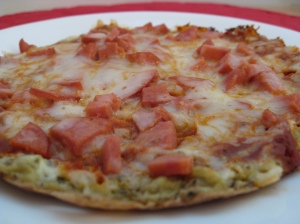 Pizza Frittata for one!

I made this frittata in an 8-inch (20 cm) frying pan with 2 eggs and a couple shakes of seasoning blend. The recipe for the herbed seasoning blend is also in that post. Instead of making your own seasoning blend (which is as complicated as making a trip to a grocery store or bulk food store that sells dried herbs in bulk!), you can use Italian Seasoning to add a pizza-y flavour.

I topped the frittata with pepperoni and cheese, omitting the green pepper, onion and mushrooms called for in the original recipe. You can use whatever pizza toppings you like to personalize your Pizza Frittata.

The frittata will slide right out of the pan onto a plate. It’s best eaten with a fork as it will be hot. If you let it cool a little, then cut it into wedges, it could be served as an appetizer, sans cutlery!

This is such a simple and great-tasting recipe. No flash in the pan, but certainly ready in a flash!

When making presentations about eggs to high school Family Studies classes, I often ask a couple students to help me make a few 6 or 8-egg versions of Pizza Frittata so everyone can have a taste. The recipe always goes over well.