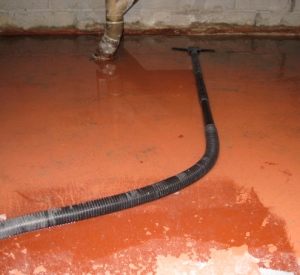 How I spent my evening: vacuuming up water in the crawl space

Last night around 11 p.m., between vacuuming up the melting snow and rain leaking into our basement, and emptying the Shop Vac too many times to count, I found myself cooking macaroni and cheese.

Murray and I had been sharing clean-up duty all evening. He’d been home sick with the flu during the day so he wasn’t feeling at full strength. With the rain still falling outside and the snow melting in the balmy 7F weather (that’s warm for February in Ontario!), we knew it would be a long night – and most of it would be spent in the damp crawl space.

The crack where the water was draining into the crawl space

At one point we calculated that 5 gallons of melting snow and rain was seeping into our crawl space every 5 minutes.

This little bit of water was nothing compared to the serious reports of flooding others in our area were experiencing requiring them to evacuate their homes as swollen rivers overflowed their banks.

But still, the crack in our home’s foundation was an inconvenient situation that required some effort and vigilance in order to prevent damage to our laundry and family rooms.

As luck would have it, the Shop Vac died at about 9 p.m., requiring a trip to Walmart (the only store open at that hour of the night that would have had a Shop Vac on its shelves) to buy another one.

Mac and cheese - the anytime fuel, I mean food!

But back to the mac and cheese! All that hard work meant by 11 p.m., Murray’s appetite had begun to return. He was feeling hungry enough for some comfort food for his not-quite-back-to-normal stomach. Plain mac and cheese with a squirt of ketchup would hit the spot, he thought.

Good thing we both fueled up on some energy-boosting carbs because we had to keep a vigil all night, setting the alarm clock to wake us every 1-1/2 hours to vaccuum up the water that just kept finding its way into our house.

By morning, thankfully, the little waterfall had diminished to a trickle. We agreed that a sump pump would be a wise investment. And so would more mac and cheese in case we don’t get the sump pump installed before the next ‘heat wave’ hits southern Ontario.

Have you got a favourite time, place or way you enjoy mac and cheese? Plain? With ketchup? Before or after tackling a big project? As a midnight snack? With canned tuna or ham and peas mixed in?

Kraft Foods has lots of recipes and suggestions for using mac and cheese.

(As delicious as Kraft Dinner mac and cheese is, I’ll confess our brand of choice is Presidents Choice White Cheddar, sold at the Loblaws family of stores.)