The heady aroma of cinnamon greeted me a couple days ago when I entered the building where I work. It smelled as deliciously enticing as the aisle where the Cinnabon store is located in my local shopping mall.

Unfortunately I was not greeted with an oversized cinnamon bun oozing with a buttery cinnamon-sugar filling and dripping with icing. No, a co-worker had simply made cinnamon toast to start her day, permeating the office with the sweet smell of the familiar spice.

It was a fragrant reminder that sometimes the simple things are truly the best. 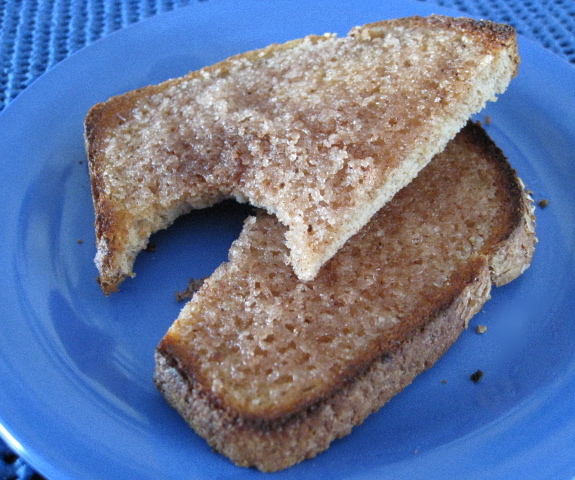 Savour the aroma and taste of Cinnamon Toast!

To make Cinnamon Toast, you can either toast or broil the bread. Either way, it’s is a deliciously simple treat!

Combine sugar and cinnamon in a small bowl.

Method 2: Place slices of bread on a baking sheet. Spread each slice with butter. Sprinkle sugar-cinnamon mixture over top. Broil bread 6 to 8 inches (15 to 20 cm) from grill until cinnamon-sugar topping is bubbly, about a minute or two. Watch closely so bread doesn’t burn.

* Use the bread of your choice (whole wheat, white, Challah, French, etc.) or English muffins or bagels.
* Vary the proportion of sugar and cinnamon as you like.
* Make up extra topping mixture and fill a small spice bottle, container or sugar shaker so you can readily make cinnamon toast whenever the craving hits.
* If you’re a chocolate lover, add a little cocoa powder or some finely grated chocolate to the sugar-cinnamon mixture.

One thought on “Cinnamon Toast: sweet, cinnamon-y and simple!”