I don’t go back to work until January 6th, so I wouldn’t say Christmas vacation is over, but once we get back home to Kitchener from Winnipeg, where we spend Christmas with our families, it always feels as if the holiday part is pretty much over.

We got home late on December 25th. Christmas is officially over.

So, how did I spend this holiday?

It was a pretty typical Christmas except for the start. We were scheduled to fly out of Toronto at 8:15 a.m. on Sunday, December 21st. It was supposed to snow the night before our departure, so to avoid a slow drive from Kitchener into Pearson Airport in Toronto if the roads were bad – which could possibly mean missing our flight – we decided to stay overnight at a hotel near the airport. 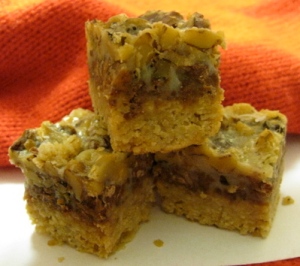 After a hectic day of last minute shopping and packing, we got into Toronto Saturday night, enjoyed a late supper at Moxies, then checked into the Toronto Airport Marriott where we snacked on Chocolate Almond Toffee Bars I had tucked into my suitcase at the last minute. We enjoyed a great night’s sleep under a cozy duvet with our heads comfortably resting on feather pillows.

The weather forecasters were on the mark as the next morning we woke to falling snow and slippery roads. We had planned to take the 7 a.m. hotel shuttle to the airport. Since we (unwisely) hadn’t built any extra time into our schedule (assuming that since we were so close to the airport, there couldn’t possibly be any delay getting to it!), when the shuttle hadn’t arrived by 7:10, we decided we’d better grab a cab.

Terminal 1 at Pearson International Airport was a zoo when we arrived. There were long line-ups everywhere and those in line did not look happy. There seemed to be rampant confusion everywhere with frazzled passengers not sure what line they should be in. We already had our boarding passes and just needed to drop off our luggage. When we finally found the end of the line we were to be in, I seriously doubted we would make our flight. I had never seen as long a line – just to drop off luggage.

After waiting in the line for a while, an Air Canada agent came along and pulled out those passengers who had flights leaving around 8 a.m., directing us to wait in another line. By the time we got to the baggage drop off counter, there were only 25 minutes left before our flight was to leave. Too little time, the agent told us. The boarding gate had closed and we’d have to re-book our flight.

Good thing we’d stayed overnight at a hotel near the airport so we wouldn’t have any trouble catching our flight, we agreed. We were hungry, hot and already tired of traveling.

The agent directed us to another line to re-book our flight. Once there, another agent told us we could either try re-booking by using one of the phones nearby or going down three floors to a spot where we could re-book with someone in person.  One look at the line-up for the phones and we decided to take our chances downstairs.

SO, we dragged our stuff down to the appointed location where we found a line-up of about 100 people, all waiting for ONE ticket agent! Reluctantly we joined the line….and began the wait. After 15 minutes, the line crept ahead about a foot. A woman ahead of us calculated at that rate, it would take us 5 hours to get to the agent. I think her math was off. It would have been more like 8 hours.

Patience not being one of Murray’s virtues, he decided to go back upstairs to try his luck getting on a phone. I waited in the slow line downstairs for a miracle to happen (more ticket agents to show up!). For the next hour, we texted back and forth – “Is your line moving?” “Moved a foot. How about u?” “I’m hungry. Should have eaten breakfast B4 we left.”

Then I received the all-important message – “Come.” I dragged the suitcases back upstairs to find that Murray had been able to book us on a 12:30 flight to Winnipeg. Not bad, considering the stories we’d heard about people not able to re-book flights for days.

AND – there was a silver lining! We had seats in Executive Class. That meant we could take advantage of the amenities in the Maple Leaf Lounge prior to our flight. Hey, missing a flight wasn’t so bad after all. Good thing we’d stayed overnight at a hotel near the airport so we wouldn’t have any trouble catching our flight!! 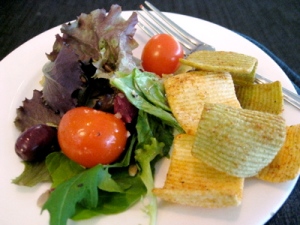 We had about 1-1/2 hours to wile away in the Lounge. Of course there were complimentary food and drinks to enjoy so we tucked into minestrone soup, French bread, assorted fruit, a mini salad bar, and a selection of snacks including sun-dried tomato and basil potato chips.

We marveled at our good fortune and wished that flying could always be this civilized. 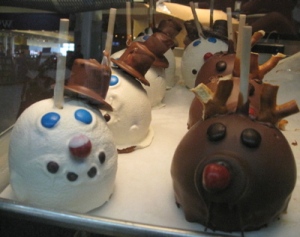 When it was finally time to head to our gate, we left feeling relaxed and nourished (not to mention merry and bright!), likely not how most other passengers in the Terminal were feeling.

On the way to our gate, we passed the Rocky Mountain Chocolate Factory shop. Chocolate covered caramel apples decorated like snowmen and reindeer adorned the shelves. At $11.99 per apple, they would be an extravagant, albeit fun gift to give or receive!

Sitting in Executive Class meant we were served lunch on the plane. (Good thing we had eaten in the Lounge just an hour earlier!)

Once we landed in Winnipeg, it seemed we moved from one dining experience to the next. That evening we had supper with Murray’s sister at the The Rib Room in the Best Western Charter House Hotel. I enjoyed a delicious French Onion Soup, and prime rib with mashed potatoes, yorkshire pudding and broccoli.

The next morning we met at my brother and sister-in-law’s home for a brunch of crepes with fruit toppings, whipped cream and syrup.

The day after my entire family gathered together for a dinner of coleslaw, green beans, farmer sausage, meatballs, and perogies with creamy gravy. To prepare perogies for 14 people, we boiled them in batches and kept them warm in an electric frying pan. Another time, I think we’d cook them in a slow cooker to simplify preparation.

The following evening – Christmas Eve – we gathered together as a family once more for our traditional evening of appetizers and sweets prior to opening gifts.

On Christmas day we enjoyed a full turkey dinner with all the trimmings at Murray’s sister’s home.

Christmas may be over for another year, but the food memories will live on for a while yet.