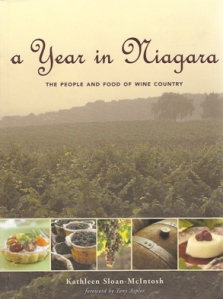 a Year in Niagara by Kathleen Sloan-McIntosh, Whitecap Books, 2002

After our trip to Niagara-on-the-Lake last weekend (see July 10th post), I was really pleased to find a Year in Niagara by food writer Kathleen Sloan-McIntosh (Whitecap Books, 2002) on my book shelf. Not that I didn’t know I had the book, but with the bookcases in my home office crammed with cookbooks and food magazines (and a serious case of age-related bad memory!), sometimes I need to stumble across something in order to remember I have it.

a Year in Niagara is a wonderful tribute to the foods, wines, chefs and farmers of the Niagara region. And it’s an interesting read. The book follows the seasons in the Niagara region of Ontario – month by month – highlighting foods grown in this area each month, and featuring recipes that use those foods.

This morning we picked up Ontario strawberries, asparagus and cherries at Herrle’s Country Farm Market in St. Agatha. We don’t live in the Niagara area (we’re a little over an hour away), but as I flip through a Year in Niagara, lots of the recipes intrigue me considering what’s now in the fridge. How about Warm Asparagus Salad with Watercress & Radishes in Rhubarb Riesling Dressing or Asparagus Ravioli with Basil Butter? Anyone for Lemon and Strawberry Cake with Lemon Curd Cream?

I spotted some lavender at Herrle’s and considered putting a bunch into my basket along with the fruit and aspagarus. But I didn’t and now I don’t remember why (why is that not surprising?!). I’m wishing I had purchased some so I could make Pink Lavender Lemonade or Cedar-Planked Salmon with Lavender Butter.

And these are just a few of the enticing recipes from the May and June chapters!

I can’t wait for August…