Over the Christmas holidays, Murray and I enjoyed a three course fondue meal with his sister Lorna at The Melting Pot Restaurant in Winnipeg, Manitoba. All that dipping inspired us to buy a new tea pot.

What? You don’t see the connection between fondue forks and tea pots? Well, let me explain. But I’ll start at the beginning and describe our meal in case you get a chance to visit this fondue restaurant.

We started with a salad (a Sunshine salad for me – mixed greens, feta cheese, red onion, olives and pecans, drizzled with a sun-dried tomato dressing). Salads were followed by a classic cheese fondue made with Gruyere and Swiss cheeses, wine, kirsch, and a medley of spices that included a wonderful punch of nutmeg.

We continued our dipping with a “surf and turf” bouillon fondue of scallops, prawns, chicken, beef and pork with three sauces (seafood sauce, a dill sauce, and a chili sauce, if memory serves). This fondue was accompanied by rice and Thai-style vegetables.

A chocolate fondue with fruit dippers finished the meal on a very satisfying note. 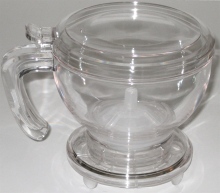 Along with the dessert fondue, Murray ordered tea. It was served in a see-through tea pot that housed an infuser for the tea leaves. The word “BrewT” was stamped on the tea pot.

The pot was a little taller and larger than the one shown on the left.

We were intrigued by the pot with its pronged feet. Although we had all seen clear tea pots before, this one appeared to have no pouring spout.

Here’s how the pot works.

Tea leaves and boiling water are placed in the pot (1 teaspoon (5 mL) tea leaves and 1 cup (250 mL) water per cup of tea). The tea is allowed to steep for a few minutes.

After the leaves have steeped, the pot is set on top of the cup. This pushes the release valve open which allows the tea to pour into the cup.

The three of us were impressed by the pot’s efficiency, probably because most restaurant tea pots pour so badly you usually have tea everywhere but in your cup.

Of course the trick with this pot was knowing when to lift it off the cup so it would stop “pouring”, otherwise the tea could overflow the cup.

But judging when the cup was nearly full proved to be not that difficult. You just had to lift the pot for a look, and to immediately stop dispensing tea.

Once we were back home, Murray was on a hunt to find a similar tea pot.

An online search revealed that BrewT was available through Cornelia Bean Ltd. in Winnipeg for $24.99.

We decided to check a local tea shop to see whether they sold anything similar. Sure enough, Distinctly Tea in Waterloo (Ontario) carries three different styles and sizes of this type of tea pot. Each comes with a round coaster on which the pot sits to catch any drips.

We ended up with the tea pot above ($21.99) which make 2 cups (500 mL) of tea (and can probably also be used with ground coffee to make a couple cups of coffee). Neither the pot or the box it came in were labelled with the brand of the tea pot, so I can’t tell you a name to look for if you’re interested in this particular style. No doubt your local tea shop will carry something similar.

We also came home with some new teas to try:

* For me – small samples of the following:

– Earl Grey de la creme: A Ceylon black tea with oil of bergamot and vanilla cream flavour. We were told it was the store’s most popular tea, and after tasting it I can understand why. Very pleasant.

– Icebush Chocolate: A caffeine-free Rooibis tea with orange peels, and ginger, apple, carrot, cacao, papaya and pineapple bits. I quite like this one. The tea leaves have a lovely chocolate fragrance; once brewed, the chocolate flavour of the tea is nicely balanced rather than being overwhelmingly chocolatey. (Even chocolate lovers like their chocolate to be in harmony rather than overpowering!) Chocolate can have a fruity flavour and this combination of fruit bits in these tea leaves works well with the cacao used for the tea.

– Canadian Maple (I’m enjoying this one with a buttery shortbread cookie as I write this): A Ceyon tea with maple syrup flavouring. The golden colour of this tea, at least at the strength I brewed, reminds me of maple syrup. I taste just a hint of maple flavour which is all I’d want. I appreciate that the tea does not have a sickly sweet or strong artificial taste. I feel very Canadian enjoying this tea and think I will go pour myself another cuppa!